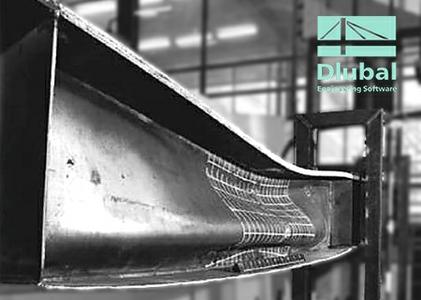 The European standard Eurocode 3 (EN 1993-1-5:2010-12 + NA 2010-12) describes design and construction of plate-like structural steel components used in the member states of the European Union. With the add-on module PLATE-BUCKLING, the DLUBAL company provides a powerful tool for designing plate-like structural components. Country-specific regulations are taken into account by National Annexes (NA). In addition to the parameters included in the program, you can define your own limit values or create new National Annexes. PLATE-BUCKLING can be used as a stand-alone program or as an add-on module in RSTAB or RFEM. In the add-on module, you can import design-relevant input data and internal forces from the current RSTAB or RFEM model. Finally, the design process can be documented in the global printout report, from input data to design. PLATE-BUCKLING performs all typical stability, stress, and deformation analyses as well as the torsional buckling safety check for stiffeners. The Stability analysis is carried out according to the method of stresses reduced by the interaction criterion. Furthermore, analytical equations for calculation of critical buckling stresses from Annex A are implemented, thus allowing for a calculation using the eigenvalue solution.

Since its beginnings in 1987, the Dlubal company has been involved in the development of user-friendly and powerful software for structural and dynamic analysis. With RSTAB and RFEM Dlubal offers programs for the ambitious structural engineer that meets the requirements of modern civil engineering and mirrors the current state of art. RSTAB is a 3D framework program, while RFEM represents a 3D Finite Element Analysis (FEA) program. Both are the basis of a modular software system: This basic module calculates internal forces, deformations and support reactions. For the following design, add-on modules are available which account for the specific requirements of materials and codes. Due to this modular conception of the software, a package can be assembled that is tailored to individual demands.